CPR contributor Rabbit shared this audio from an event in Montreal launching Diana Block’s new novel, Clandestine Occupations. Diana spent thirteen years living underground with a political collective committed to supporting the Puerto Rican independence and Black liberation movements, during which time she had two children, worked in the AIDS movement, and published poetry under a pseudonym. Diana spoke about life underground, the ongoing reality of political prisoners in the United States, and read from her book. We also have a portion of an interview with Diana conducted by CKUT Prison Radio in Montreal. 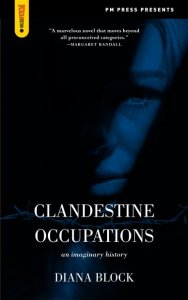